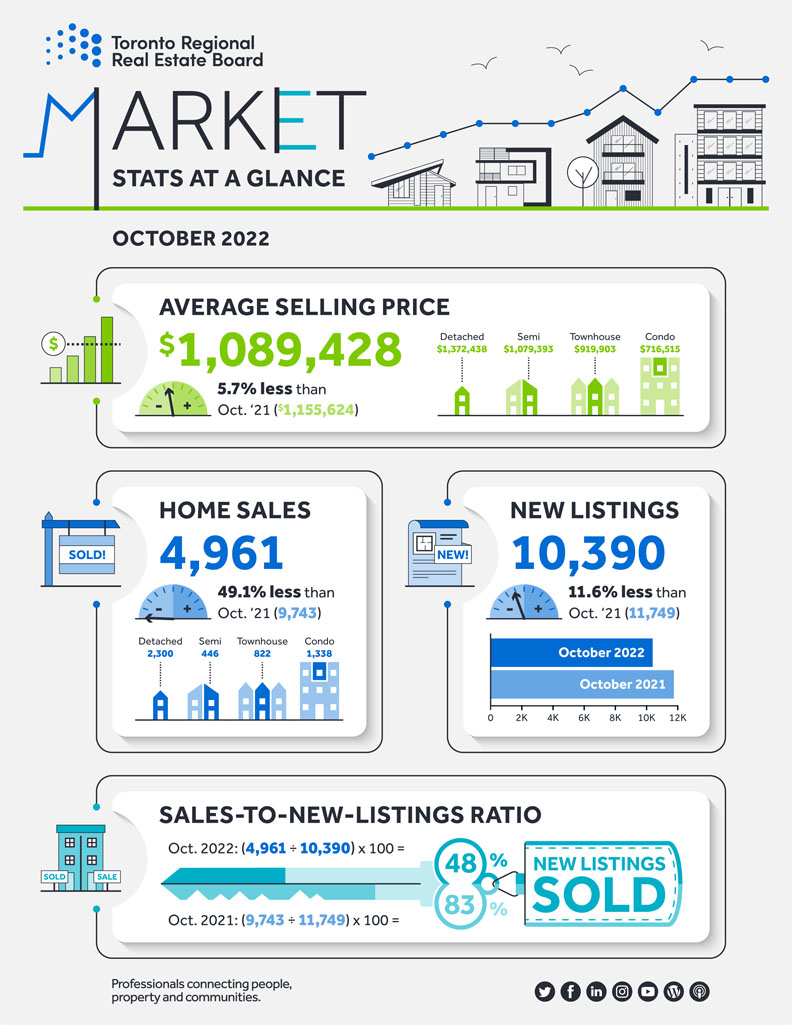 Despite the continued transition to a higher borrowing cost environment, the average selling price in the Greater Toronto Area found some support near $1.1 million since the late summer. GTA home sales continued to adjust to substantially higher interest rates in October 2022, both on an annual and monthly basis. However, new listings are also down year-over-year and month-over-month. The persistent lack of inventory helps explain why the downward trend in home prices experienced in the spring has flattened over the past three months.

GTA Realtors reported 4,961 sales in October 2022 – a similar number to September 2022 but down by 49.1 per cent compared to October 2021. Year-over-year sales declines were similar across major market segments.

With new listings at or near historic lows, a moderate uptick in demand from current levels would result in a noticeable tightening in the market in short order. Obviously, there is still a lot of short-term economic uncertainty. In the medium-to-long-term, however, the demand for housing will rebound. Public policy initiatives like the recently introduced provincial More Homes Built Faster Act and strong mayor provisions will help ensure we see more homes being built in the future.

The MLS Home Price Index (HPI) Composite Benchmark was down by 1.3 per cent year-over-year in October 2022. The average selling price for all home types combined, at $1,089,428, was down by 5.7 per cent compared to October 2021. The monthly trends for both the HPI Composite and the average selling price have flattened in recent months following steeper declines in the spring and early summer.

Prices fell 19.5% from the peak in February to the bottom in July, but have since risen 1.4%. The past 4 months have been very similar, with prices only varying 1.4% over that time. This would indicated that consumers have come to terms with higher borrowing costs. The Bank of Canada’s recent messaging suggests that they are reaching the end of their tightening cycle. Bond yields dipped as a result, suggesting that fixed mortgage rates may actually trend lower moving forward.

The housing sector has certainly been impacted by rising borrowing costs. Housing-related spin-off benefits to the GTA economy, which average $70,000 per transaction, will be down by close to $3 billion this year. Associated jobs and government revenue streams will suffer as well. This illustrates the balancing act the Bank of Canada will be dealing with in the months ahead. It will also be incumbent on policymakers to ensure that inflation is not being furthered by price gouging at the retail level.